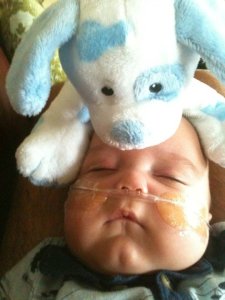 Take a look at this little guy. If you don’t know his story, what can you tell me about him? You’ld probably use words like “chubby cheeks,” “tank” and “solid” right? The oxygen hose cues you in that there is more to his story than you know. But, you don’t know his backstory.

His name is Henry George and he is 11 pounds and 3 ounces. He was born into a family that adored him before they even met him. His home would balance out a bit from Mommy, 3 girls and daddy. Yes! Another male in the family!

Henry came by emergency surgery at 24 or 25 weeks. (forgive me for not knowing the actual specifics. All I remember was nights up struggling with my disease and using the time to pray for Hank). Like a dinner guest who shows up Monday for an invitation for the coming Saturday, we weren’t ready for Henry yet. We’re all used to guests who show up an hour early or maybe even a couple hours. We scramble but it all works. But what about a guest who shows up 6 days before your dinner party? I’d probably give them a confused look and let them know to come back Saturday.

There was no going back for Henry. He was here no matter what the outcome.

A lot of us shook our heads sadly knowing it was just too early for Henry to survive. The Google searches yielded a few promising stories but most just confirmed that Henry was born too early to make it very long. So many began praying. Little Henry, 1 pound and 10 ounces, without his momma being able to hold him needed help. There were nights I could only pray, weep and plead with my Father for little Henry.

His mom, a woman with an angelic singing voice, posted this on her Facebook:

Henry is home with his family now and he’s a miraculous little chunky monkey. He still needs our prayers as he grows but each and every day is a gift.

Someday, I pray, Henry will stand firm to tell His backstory. I see him telling people of the power of a mighty, mighty God and all the love that His people give. I pray he will point people to the Grace of Jesus.

What is your backstory? I’d love to read it in the comments. My backstory is still being written. I’m still fighting, still struggling and only can manage to sing a “broken hallelujah” right now. My little buddy “Hank the tank” reminds me that nothing is impossible for my God.

Is your backstory still being written? Maybe I’ll get out of the hospital today … maybe I won’t. Lord, I want to be content no matter what.

Living life to the fullest, walking in the dust of my Rabbi, creating art through photography and written word, speaking words of hope wherever and whenever the opportunity arises.
View all posts by Scott Linscott →
This entry was posted in Christianity. Bookmark the permalink.

3 Responses to Meet a miracle