Lasting impact in my mother’s memory

It was Monday, April 16 and I was in Oratorio, Guatemala once again at one of my favorite places on Earth. I was with a team of about 20 people serving at the AMG Noah’s Ark Center. Some of the children were performing a dance at the front of the room while more than 100 others sat on the floor watching.

I noticed a little girl sitting in the middle of the sea of faces. She has sitting up on her knees to get a better view, clapping along and smiling. I snapped this picture when she looked my way. I’m not sure why she stood out to me but I kept seeing her little smile throughout the week.

The little ones that Robin and I sponsor, Tanya and Damaris, consumed most of our time and attention whenever we were with the larger group. Sponsored children want to get every possible second with their “godparents” who visit. Of course, very few ever manage to make a visit so it is very, very special when some do. Every sponsored child lives vicariously through us wondering, “is my godmother like you?” Is my godfather like you?”

On Wednesday, after two days of playing games, singing songs, making crafts and reading bible stories with the children and visiting many of their homes, our team asked if we could meet children who were waiting for sponsors. It was chaotic and confusing. My job was to snap a picture of one child after another as they came through the line. It was rapid fire. I moved quickly and efficiently until this little smile moved into my lens. I learned that her name is Karla. Again, I’m not sure why she stood out to me.

9 of the 21 children were quickly sponsored by our team members. But, Robin and I already have two children we sponsor, so we were not planning to add another. After printing out the photos on my portable printer and handing team members their children, I was left with 12 still waiting. Among them was Karla’s face. It was Thursday, our last day with the younger children. I knew God had a plan for Karla that involved us.

When we returned to the United States, my mother, who has been very forgetful over the last few years brought up the subject of sponsoring a child. She had been asking me for details since our first trip in 2016 and I never followed through. This time I had Karla’s picture with me and took it out to show her. She seemed genuinely excited.

It took the month of May to get Mom all set up sponsoring Karla. My plan was to help her write letters and we talked about what she could buy at the dollar store to send on my next trip, But then, June 2, a nurse at the Veteran’s Home where she was rehabbing from shoulder surgery found her unresponsive. We later learned it was a massive stroke. Mom passed away on June 7.

There was no question that we would add Karla to our AMG family and think of Mom whenever we write to her or see her. But my sisters and I knew that Mom would have wanted to do something for her little girl, something significant. But, what?

I contacted the director at the AMG School in Oratorio thinking that perhaps a year’s worth of Mom’s sponsorship would be able to provide a brick wood stove with chimney pipe for the family. Many families cook inside, over open fires and have numerous issues with eyes and lungs from all the smoke. But there was a greater need in Karla’s home.

He explained that their house had dirt floors that turned to mud in the rainy season because of holes in the walls. They needed some major cement work and the services of a mason to patch the holes and make a cement pad instead of a dirt floor. I gladly added some to my Mom’s gift to make this a reality in her memory.

Yesterday I received before and after photos. Mom would have been so pleased to see what she did for Karla and her family. The director tells me that the parents are overwhelmed with appreciation and so very thankful. 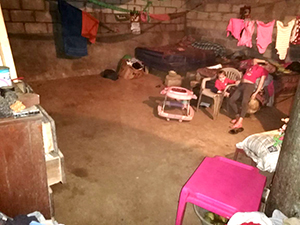 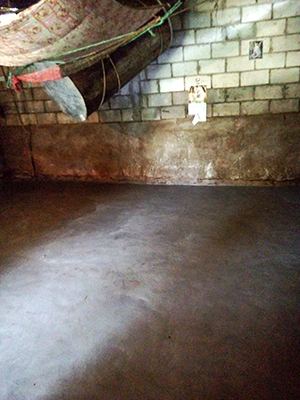 Barrel for corn hangs from ceiling 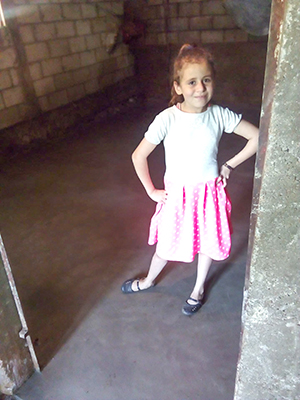 No more mud in the rainy season!

Look at that smile!

To make a lasting difference in the life of a child, visit https://goo.gl/hbVh3g and become a sponsor.

Living life to the fullest, walking in the dust of my Rabbi, creating art through photography and written word, speaking words of hope wherever and whenever the opportunity arises.
View all posts by Scott Linscott →
This entry was posted in Liver disease. Bookmark the permalink.

1 Response to Lasting impact in my mother’s memory