How should I shepherd this flock? Where do I begin? 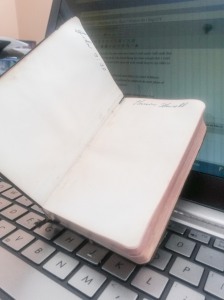 “I have something for you,” Jen said. Her face wore her father’s half-smirk-half-smile that always made me wonder what he was up to. She stood facing me close enough that I could see the same spark that I used to see in her dad’s eyes when he would drop by my office to chat.

We stood in the lobby of a church that had weathered more than 125 years of history, about to walk in and join 200 or so others who had gathered to celebrate its next phase of life.  I was about to be officially installed as its new shepherd.

Most of my friends who greeted me before our conversation spoke clichés about God working in mysterious ways or asked if I ever imagined myself in this situation – pastor of a traditional, historic church. With my cleanly shaved head, my jeans and cowboy boots or canvas Chucks, none would have pictured me here. Was it possible that this church that had seen three traditional pastors come and go in just ten years, was moving toward embracing a guy like me with no suits, no robes and little use for ritual, ceremony or barriers of tradition? Were they really open to me with my diamond earring and my penchant for thinking outside the box?

Jen knows the story behind the diamond earring. Her father had one just like it. She knows that I pierced my ear in his memory after he passed away. She knows it is my reminder of her dad and the way he loved Jesus in such a real and transparent way. She knows that I loved his humility and his refusal to sit in judgement over others.

Vern was the only “old guy” I ever met with an earring. He lived his life with his wife Barbara at his side, always concerned for the hungry, the naked and the oppressed. The underdog was his heart, his love and his mission.

When Vern and I had our talks he’d tell me about things like playing music and singing on the steps of an old, downtown church decades ago hoping to connect with the street people. His half-smirk-half-smile would make its appearance when he described other well-meaning church folk wanting them to stop lest they attract the wrong crowd. He would not give up.  Vern was sure that Jesus came to give life and hope to that “wrong crowd.” That was his Jesus.

Even into their 70’s, Vern and Barbara took others to places like Cambodia to open eyes to poverty and injustice. There was no stopping them. With little money, a junky car, a simple lifestyle, and no resources, their treasure was in heaven. Their focus always on the “least of these,” the broken and people who didn’t know the Hope of Jesus.

It was just two years before when Jen’s father and I were in the same hospital, on different floors, trying to convince the nurses to let us visit each other. Vern needed major heart surgery and I needed a liver transplant. Neither of us knew if we would go on much longer. We tried to connect using iPads and the phone but were too weak to share much of anything. I missed him.

Vern passed away on April 27. 2011. I could not attend his funeral on May 1 because I was too sick. I so wanted to be there to hug Barbara and let her know how much her humble husband had meant to me, how much he helped shape me. I remember praying a simple prayer, “Lord, if you choose to let me live, I will carry on like Vern.” Six days after Vern’s funeral, I received the liver transplant that saved my life.

“I talked with my mom and she agreed you should have it,” Jen said. “Dad always carried this bible with him.”

I looked down to see a small, black, pocket-sized bible in her hand. I felt tears fill my eyes and my throat clinch tight with emotion. I had to turn away. Jen’s eyes filled too. I tried my best to use humor to regain control but had to walk away to compose myself. The service was starting in just a few minutes. I needed to pull myself together.

I know Vern would have been there that day if he were alive, wearing that smile I loved, earring sparkling and raising an eyebrow or two in the crowd. Vern always encouraged me to do the crazy faith things, to push past the doubters and trust God to do the work. I know what he would have said had I asked him if I should step up to this challenge and try to shepherd this struggling flock and reignite its fire. He would have grinned and said, “Why not you?” I would have asked him how to shepherd. I would have asked him for words of advice.

After the service and celebration, I reached into my back pocket for Vern’s bible and gently turned the brittle pages. It had that familiar old, black bible smell and feel. There were no bookmarks, no highlights and nothing that I could see standing out as his favorites. I was searching for any part of Vern I could find. And then I saw his name written on the first page with one, lone scripture reference: John 3:30. I quickly flipped to see what the one thing so important to Vern could be.

I read the words and knew they were Vern’s answer to me for how to shepherd this flock and where to put my focus. John 3:30 is a short, simple verse that sums up everything I could tell you about my friend’s life and attitude.

“He (Jesus) must increase, but I must decrease.”

I read the verse over a few times thinking about those words and their power, oblivious to the conversations around me. When I snapped back to my surroundings I noticed that I was twisting my earring, my tribute to Vern, between my thumb and index finger. I looked up and saw a few people watching me, clearly wondering what was going on. I smiled, closed my newest treasure, wiped a tear from my cheek and thanked God for his providential love in allowing Vern’s message to reach me on this day when He had restored me to ministry.

Vern is right. My goal must always be that Jesus become greater, while I become less. It’s not about me.

Thank you, Vern. I miss you, my friend.

6 Responses to How should I shepherd this flock? Where do I begin?