Today, the membership of a church right here in the middle of little Westbrook, Maine voted to call me as its new shepherd. The vote came directly after I delivered my 20th message there. That’s odd.

The usual process for churches searching for pastors is to have a search committee of members go through numerous inventories to determine what the church wants. Then, the committee will solicit resumes by working with a denominational office or hired consultants, Christian headhunters of sorts, to help with the search.

Next, after culling through a pile of resumes from a wide variety of people, the committee chair will make some calls to set up an initial conversation that might be followed by more paperwork. If all goes well, the committee will either take a trip to hear the candidate deliver a message or it will arrange to hear him to preach at a church somewhere nearby.  Next will be conference calls, references and then, if all goes well, a tryout when the committee invites him to its own church. Sometimes the vote takes place at that same visit. Other times he meets with a variety of members and boards to assess compatibility and then heads home to await a call.

Again, as always seems to be the case in my life, I’m not normal. I’ve never sent out a resume or applied for any of the ministry positions I’ve held. Instead, God just drops me into things. I’m not joking.

It goes all the way back to when Robin and I were first married and finishing college. We prayed naively that God would simply give Robin a job wherever He wanted us to be. She got a job in Biddeford, Maine. We headed to California after graduation for our summer job having no idea why God wanted us in Biddeford. Shortly into our summer someone gave us a contact in Biddeford who was starting a new church. Two weeks before our return I called the number. We spent the next 7 and a half years there working with a vibrant youth ministry of more than 100 students.

When I left that position a group of doctors came to me and said, “Would you stay in Maine to help churches build youth programs?” I spent the next 6 years working full time consulting, training, speaking and coaching youth leaders with this board’s financial support.

I was in my next church less than two years when the leadership approached me with a new job description that would take me from shaping teenagers to running a ministry for children. Of course, having no training, ability nor calling for children’s ministry, I resigned. Thirty days later I started at one of Maine’s largest evangelical churches after a conversation with a salesman who attended there. We spent the next 11 years there.

I left there to plant a new church. But liver disease brought my plans to a screeching halt 4 days after attending a conference with 3500 church planters. I spent the next year literally dying. Then, after my son gave me half of his liver in a life-saving transplant, I spent the next year coming back to life. But, my ministry dreams were, from my perspective, dead and gone. The team of people who had gathered to plant with us scattered to churches all over Greater Portland. There was nothing left even though I was feeling strong enough to return to work. 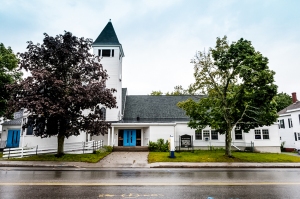 And then, this past July, God dropped us into a little, 125-year-old church right smack in the middle of the town He moved us to in January 2012. We had to give up the big Portland house we built to move into a little, two-bedroom condo within our much smaller budget. The morning’s scheduled speaker had to back out and asked me to fill in and share my transplant story.

I remember the day well. I walked into the large worship space with its vaulted ceiling, and wooden, straight-backed pews. I saw the large darkly-stained, wooden pulpit sitting high up on the front platform and thought, “no, I won’t be standing way up there today.” The church was clean and bright with beautiful stained-glass windows. It had the feeling and smell of old New England churches. 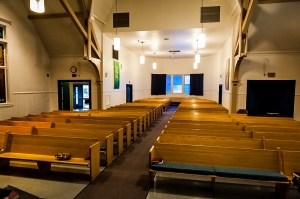 I remember waiting for people to arrive while the time to start drew closer. There was a handful of people sitting 12-15 rows back near the doors, a young family with a baby in a stroller in the very front row and another small cluster in the middle section on the right. I got the sense that it was going to be a quiet, sparsely-attended morning.

The man at the little sound desk gave me a lapel mic. I smiled and wondered why I needed a microphone. If we had moveable chairs I probably would have just had us move into a large circle but we were in pews. By the time the clock signaled the start I estimated maybe 40 people scattered in a room for 250. I remember asking people to move forward and no one budged. I didn’t feel much of a warm vibe overall despite several very welcoming people.

The music leader was a vibrant, Jamaican with whom I immediately clicked. I remember wanting to ask, “what are you doing here?” I also remember thinking, “if I was planting a church, I’d love to have that guy with me.” We sang songs that were at least two decades old but he made it work. I loved his authentic energy.

I shared my transplant story just as I had done maybe a dozen times before. I spent most of my time halfway down the aisle to be closer to my audience. We laughed some, we cried some and we exchanged hugs at the back door. They were nice people but I remember leaving with a sad feeling in my heart. I imagine it was the same feeling my friends had when they left after visiting me when I was so weak. They were glad to visit but sad about the reality of my condition. Like me during those days, this church was dying.

Several weeks later they asked if I might come speak again. I was glad to return. This time a few more people were in their spots but I had the same sad feeling. This big, beautiful facility was nearly empty in the middle of a town full of people who need Hope. Declining churches make me sad. But they were good people; kind, welcoming, friendly people. I remember praying that the Lord would rekindle a work there.

When September came I got a phone call I did not expect at all. “Would you come be our interim pastor until our new pastor arrives?”

Honestly, I almost choked. No one who knows me would use the word “traditional” to describe me. Before my transplant we were moving toward beginning a church in a storefront, warehouse or garage. It was going to be a church for people who don’t like church. Our philosophy stood firmly against owning property and getting “churchy.” The institutional, organized church with its endless committees, votes and squabbles held zero appeal. We had no interest in beginning a new work with the same old formula of sing-sermon-sing. Even the supposedly innovative church plant models didn’t really cut it for us. From what we could see most were simply adding cool music and flashy graphics to the same failing model. It was, excuse me, lipstick on the same pig. We were praying for something new and different.

I didn’t say no. Everything within me wanted to ask, “are you crazy? I think you’re looking for a suit and tie, bang-the-pulpit, drone-on-for-an-hour guy. I don’t fit. This won’t work.” But, Robin and I have learned to pray before giving an answer. When we prayed, we felt that the Lord’s answer was yes.

That was 20 messages ago. The new pastor that was coming to replace me pulled out a few weeks after I began.

Our numbers have grown. We are approaching 100 on Sunday mornings. People have moved toward the front. We had 175 on Christmas Eve. That can change in an instant. But more importantly, the remnant appears to be ready to do whatever it takes to reach the culture outside the front doors. “Creativity” and “risk” are not dirty words.

Our God works in mysterious ways, so says the cliche. Soon I will be “installed” as pastor in this church that was founded more than 125 years ago. From its lighted bell tower with hymns sounding daily at noon and 6:00 PM, to the lighted scripture sign at the front, to the polished pews inside the beautiful stained glass adorned sanctuary, I can’t imagine a more “churchy” facility.

My prayer is that with my bald, Jamaican worship-leading friend and this remnant of people who desire to be used by God, we will build a team of sold-out believers ready to follow Jesus wherever He wants to take us. No, it’s not the storefront I imagined with cheap, folding chairs, no equipment and no resources. I guess I’ll just have to settle for much, much more.

Like life, it’s what’s on the inside that matters most. I pray that when people walk inside this churchy looking church, they are surprised by the warmth, love and belonging they find. I pray that we dare invite our friends and neighbors to come and see how God is making this old, historic place brand new again. I pray we will be a grace-saturated, missional community.

If you had told me three years ago I would be where I am today, I would have told you there was a better chance of Zimbabwe competing in the winter Olympics! But here I am am.

By the way, alpine skier Luke Steyn is set to represent Zimbabwe in Sochi next month in that country’s winter Olympics debut. Luke and I will both be pressing on for the prize set before us.

Life is unpredictable but my God is always faithful.

Living life to the fullest, walking in the dust of my Rabbi, creating art through photography and written word, speaking words of hope and encouragement at conferences, workshops, church and civic gatherings.
View all posts by Scott Linscott →
This entry was posted in change, Christianity, church planting, coaching, Liver disease and tagged calling, church, first baptist church, providence, Westbrook. Bookmark the permalink.