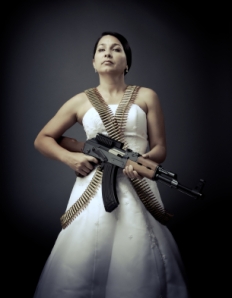 Are we a bride or a bride-zilla?

Some people watch Little House on The Prarie and wish they could go back to those simpler times. Other than Nellie Olsen being a pain in the butt, it all looks pretty good. Me? I have no desire to return to a drafty log cabin after a day of pulling a plow blade behind my horse. TV makes things look really nice.

The Waltons make the Great Depression look pretty good but talking to elderly people has convinced me that no one wants to relive those years. John-boy’s stories are great … but life was hard.

I have a bunch of Christian friends who are pretty ticked at the “institutional church” and long to go back to the early “organic church” where, according to them, things were pretty good. I’m not much of a fan of the everyone-sit-and-listen church model either but I’m not ready to bail on corporate church gatherings altogether.

Was the early church really a utopia? Was it really so much better than today? I think it has been romanticized a lot.

When I read the New Testament I see a lot of space dedicated to urging people to stop being selfish, stop bickering and start following Christ. I see Paul telling people they are missing the point of communion. I see trouble-makers being dealt with and counsel to use words wisely. I see purpose defined and a good scolding about how to use the gifts of the Holy Spirit.

Look at Ananias and Sapphira … they sell some land and then claim to give all the money to the common pool. But they didn’t give it all. They lied. Peter calls them liars and then they drop dead. That freaked people out and was pretty scarey. Try that story on for size at your next love-in, all-about-community, forgiving and accepting group! Some people read things into the story and claim Ananias and Sapphira were not willingly giving but felt pressure from the leadership. Others point to their desire to look good in front of people. I don’t read anything into it. I just see people lying before a Holy God and I know God has never been a fan of that. (Joshua 7) Ahhh … how sweet it is! The early church had no issues like we do, right?

My organic church friends are definitely anti-establishment. They point to an early church where there was no order to things and things were just so Spirit-led that everything happened spontaneously. No preacher man, no fancy musicians and no format. Everyone, according to them, just shared everything.  Really? What about Ephesians 4:11-16?

It was he who gave some to be apostles, some to be prophets, some to be evangelists, and some to be pastors and teachers, to prepare God’s people for works of service, so that the body of Christ may be built up until we all reach unity in the faith and in the knowledge of the Son of God and become mature, attaining to the whole measure of the fullness of Christ. Then we will no longer be infants, tossed back and forth by the waves, and blown here and there by every wind of teaching and by the cunning and craftiness of men in their deceitful scheming. Instead, speaking the truth in love, we will in all things grow up into him who is the Head, that is, Christ. From him the whole body, joined and held together by every supporting ligament, grows and builds itself up in love, as each part does its work.

What’s odd to me if that my early-church advocate friends are mostly anti-pastor but are open to modern day “apostles.” As they see it, the pastor/preacher is the man that is holding them down. The elders or deacons are in their way. They want a simpler church gathering that they believe is modeled after the early church. I don’t think they truly know what they are advocating.

The word “apostle” has mostly disappeared from our landscape. As a “sent one” bringing “new revelation,” it does appear that the work of apostles is done. The revelation is complete in scripture. But, when I go on to study more of what the ministry of apostles looked like in the early church, I see effective senior pastors (as we call them today) working to build up the team, provide direction and keep everyone on track in vision and purpose. We’ve attached apostle type duties to the position of shepherd/pastor and have let the apostle concept fade away mostly because it has been absorbed by some pretty odd ducks doing weird things.

The early church team had a defined structure of apostles, prophets, evangelists, pastors and teachers. It squabbled, fought, got off track and lost focus just like we do today. When it did, the postman brought a letter from an apostle to encourage them to get back to following Jesus.  A lot of times a visit followed the letter.

As a pastor/preacher type I need to learn from the early church model where apostles built teams and worked hard to involve people in ministry. I need to guard against the performance model where I invite people to simply come and watch and listen. I need to guard against working so hard to fill my church that I lose sight of the church of Jesus. I need to avoid the temptation to just have polished musicians wow the crowd every week and instead open opportunities for others to hone their gifts and grow up in ministry. As I see it, it’s my job to find the preachers, teachers, evangelists and shepherds and equip them to do their thing.

I miss my organic friends. I’m glad their podcasts are bringing them John Piper and Francis Chan but I find it ironic that each of those teachers is ministering in churches a lot like this one with their media pastors recording their messages (wow, that takes some structure!). I’m glad my friends are growing in community, eating together and sharing from the Word in comfy living rooms. I think home groups rock and wish we all were plugged into similar groups. But still, I believe there is something special and unique about corporate worship.

We’re the church of Jesus whether organic or structured. I want to do my part to make sure we’re not a Bride-zilla marching around making our demands and throwing fits whenever things don’t go our way.