Posted on February 5, 2010 by Scott Linscott 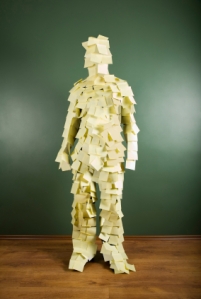 I have trouble remembering where I put my keys or what I had for dinner last night. I have trouble remembering how to get from point A to point B when I haven’t travelled that route lately. I forget important stuff like oil changes, birthdates and appointments unless I have my iPhone calendar set to remind me. But other stuff I remember like an elephant. I’ve heard that elephants never forget.

It’s weird how the stuff I remember best is the stuff I wish I could forget. Cutting comments, disappointments, arguments cling to me and pester me over and over again. If I could just forgive and forget I would sleep much better at night. I wonder if Paul had the same problem.

In Phillipians 3 of the bible, Paul wrote, “But one thing I do: Forgetting what is behind and straining toward what is ahead,  I press on toward the goal …”

Forgetting the past? Obviously Paul is not talking about getting a case of amnesia and forgetting everything. He’s talking about making a choice to forget the garbage. He’s no stranger to controversy and tough times. I think he is telling us to leave the past behind and not let the negative influence our choices or hold us back. He’s urging us to leave all that behind and press on, move forward and not get bogged down.

Paul had a pretty big fight with his friend and partner Barnabas. (Acts 15:39) It was a big enough deal that they went their seperate ways. We don’t know much more about it other than it being about Barnabas wanting to bring John-Mark along and Paul thinking he might bail on them when things got rough. Tempers flared. It happens.

I’m not surprised by the argument. I am more surprised that the details are left in the dust and both Paul and Barnabas just move on and focus on the goal of telling people about Christ and helping them follow Him. Today’s church would have five or six meetings and go bonkers with details. People would talk and make guesses and assign blame. Not Paul and Barnabas. They chose to forget what was past and just move forward honoring God.

I wish I could be less like an elephant when it comes to conflict and pain. But since I can’t just forget, I, like Paul, have to press onward choosing to act as though it never happened. Maybe that is the act of forgetting.

It’s tough to move forward when you get bogged down rehearsing the past. It’s tough to see the big picture when you let conflict attach itself and block your view.

1 Response to I want to be less like an elephant

Faith in action
Thoughts from the Corner Office

My Life & Transplant Story: Drinking from the Same Dipper