Smack them with a good dose of God? 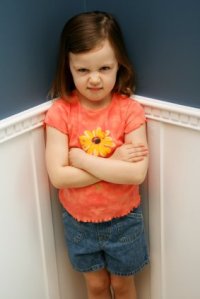 My mom used to threaten to spank me with a yardstick. I didn’t like the yardstick. When I’d see it come out of its cupboard home I’d change my behavior to avoid its sting.

What did your parents use to punish you? A paddle? Isolation? Losing a priviledge? I bet you didn’t like whatever it was. Maybe it was the simple words, “Just wait until your father gets home!” Gee, that sure made us excited to see Daddy!

Getting kids to change their behavior is not an easy task. It would be easier if we could get God on our side. What would they do then?

Picture a five year old little cutie in her pretty church dress spinning around and enjoying the freedom of the big church hallway. There she is dancing and spinning with a smile from ear to ear … until some other little kid dares to invade her space. The princess is peeved and gives him a shove to make it clear that he should bug off. But mom was watching her do it. Even worse, apparently Jesus was bummed about her behavior too.

Ouch. Poor kid. Her head dropped and the expression on her face changed to sadness. It was bad enough to make mom mad but Jesus too? He was so disappointed with her.

It’s tough being a parent. We all react out of anger sometimes. It’s tempting to use God to give us the support we want. If our kids won’t listen to us then surely they’ll listen to God. Our kids grow up learning of God and discovering that he is apparently a lot like us. His voice even sounds like ours.

I remember the parent who punished her preadolescent son by sending him to his room to read his bible and write a summary of what God told him. By the time he reached the teen years he wanted nothing at all to do with bible study. It was like the yardstick was for me. The bible came to be associated with the negative.

When we use God or his Word to punish our kids we risk robbing them of the fullness of relationship with their Creator. That’s not what any of us wants.

No one wants to hang out with instruments of punishment, pain or discomfort. I want my children to grow knowing the boundless love of the Savior. I want them to bathe in his grace and love. I want them to know that he will not turn his back on them or foresake them. And when they know that, they will want to reflect His character.

But first, I have to set my sights on reflecting His character in my own life so that they see Jesus in me. I must be less concerned about punishment and more concerned about discipline.

Living life to the fullest, walking in the dust of my Rabbi, creating art through photography and written word, speaking words of hope and encouragement at conferences, workshops, church and civic gatherings.
View all posts by Scott Linscott →
This entry was posted in Uncategorized. Bookmark the permalink.